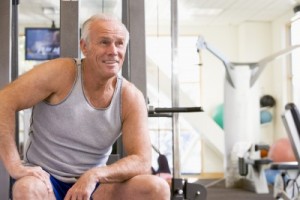 Great news out of the medical community recently! People who exercise and have a higher level of physical fitness during middle age have a significantly reduced risk of suffering from dementia later in life.

Dementia can be defined as the a decline in mental ability severa enough to interfere with daily life. Anyone who has cared for an aging relative with dementia can testify to how difficult it is to watch someone they love suffer that way.

An article was recently published in the Annals of Internal Medicine by Dr. Laura F. DeFina of The Cooper Institute in Dallas, Texas. In  a study, 19,458 non-elderly adults were studied and asked to take an exercise treadmill test between 1971 and 2009 to evaluate their baseline fitness levels. The scientists then examined medical data for the individuals as they became eligible for Medicare.